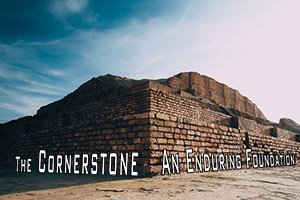 In modern architecture, a cornerstone is a decorative and ceremonial building block placed to commemorate the dedication of the structure. These stones are often engraved with the date and an inscription. Sometimes this brick is hollowed out to serve as a time capsule filled with memorabilia.

The cornerstone in ancient architecture was different. Rather than being a token piece of a building, the cornerstone was foundational. Great care went into the placement of this first stone because every other stone was set in relationship to it. If the cornerstone was not square or placed incorrectly, the repercussions affected the entire structure and could be detrimental to the construction’s integrity.

Faith is the cornerstone of the twelve bedrock attitudes of an abundant, happy life. However, you will determine whether faith will be set as a foundational stone or an ornamental addition to your life. Faith will either impact every aspect of one’s thinking or be an afterthought.

Don’t allow your beliefs to be reduced to symbolic statements to dress up your appearance in the eyes of others or become little more than a distant memory from your childhood. Purpose to make faith an integral part of the kind of life you want to build. Set this first bedrock attitude intentionally.

The starting place is to know what faith is. Most of us only think of faith in terms of our confidence or trust in someone or something. People often consider such hopeful belief little more than blind faith because it cannot be proven and is built upon one’s feelings.

Faith might lead you to trust in God or in other people to follow through and do the right thing. You could believe in yourself to become a self-made man or woman or hold on to fate and dumb luck. Yet when faith is only thought of in terms of our confidence for the desired outcome, it is reduced to little more than wishful thinking.

Faith as a cornerstone to shape our lives means far more than self-confident hope for things to turn out better. Trusting faith is important, but it must be grounded in truth greater than ourselves.

Faith also means the doctrines or teaching of a church or religion, a creed of belief. However, “faith should not be in the wisdom of men but in the power of God.”1 Our faith should be grounded in our knowledge of who God is and not by some creed or doctrine defined by human understanding.

In one way or another, most of us know God. A 2018 survey shows that the vast majority of Americans still believe in God or some kind of higher power. While only one out of ten does not believe in any kind of god at all, nearly six in ten say they believe in the God of the Bible and three in ten believe in a higher spiritual power.2

Regardless of your brand of faith, Christian, Muslim Jewish, Buddhist, Hindu, or something else, you should be able to point to times when the power of whatever you consider God to be at work in your life. This is how powerful God or a higher being reveals the truth about His existence.

Encountering a God who makes Himself known should not be a stretch for most people to believe. This is faith as a cornerstone and enduring foundation to build your life.