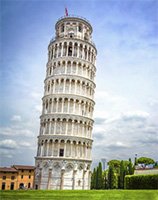 The abundant, happy life you desire is possible when you build upon a firm foundation. No matter what it is, everything will rise or fall upon its foundation—literally.

Consider the Leaning Tower of Pisa. The foundation was laid in 1173. Just five years later the tower began to sink with the completion of the second floor due to the unstable subsoil. For nearly a century the tower stood unfinished. This gave the ground much needed time to settle. Otherwise, the tower would have undoubtedly toppled. Nearly 200 years later, despite its lean, the tower was completed in 1372.

When a foundation is unstable, much time and effort is required to repair it and prevent a catastrophic collapse.

Because the weak foundation was never fixed, the Leaning Tower of Pisa continued to sink. In 1990 the tower was closed to the public for fear it would soon fall under its own weight. A project to strengthen the foundation and stabilize the tower began in 1993. Even with modern technology and equipment the tower remained unsafe until its reopening in 2001.

The groundwork and infrastructure that shape your thinking are vital. Everyone wants a fulfilling life, but not everyone achieves it. Often people want to blame others or their circumstances for their unhappiness, but this is just another proverbial crack in the wall caused by a weak foundation. The reason people are unsatisfied is found in their bedrock attitudes—the mindsets that shape who they are as a person.

The way you and I think forms the foundation stones upon which we live our lives. For the abundant life we desire, our minds need to be grounded upon solid bedrock attitudes.

Some people give little thought to the infrastructure of the mind and how they chose to think. When we fail to do the necessary work to establish rock solid patterns of thinking, we carelessly build our lives on shifting sands. We sink into bad habits, careless decisions, depression, and more.

When the storms of life roll in, and inevitably they always do, building on the sand with careless thinking and unstable mindsets will lead to destruction.

Rather than go through life with a faulty foundation, we can change our way of thinking to develop a firm foundation. We can discover the bedrock attitudes to build the abundant, happy life we have always wanted.

Firm Foundation provides you with FUEL for your FIRE – Fuel for your LIFE. This is more than a slogan. FUEL, FIRE, and LIFE are an acrostic to identify the twelve foundational mindsets to build the fulfilled life you have always wanted.

Now is the time to renew your mind with a firm foundation.